Greenbacks and street signs: Can Ron Paul save Kiwis from a longer commute? 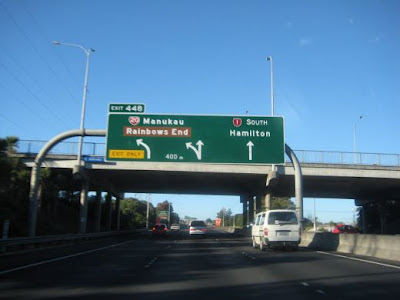 Prior to 1969, New Zealand was on the "Imperial" or "English" standard of measurement. This means that, for example, road signs reported distances between cities in terms of miles. Many visitors to the country have probably made the drive from Auckland, NZ's largest city, to Hamilton. Prior to 1969, road signs would have informed such visitors that Hamilton was about 80 miles from Auckland.

In 1969 the New Zealand government did a truly evil deed: they increased the distance between the cities from about 80 miles to about 125 kilometers. Those Kiwis who had to make the drive must have been furious! Why would any government do such a thing? Who wants to drive longer distances between cities in which they conduct business? A trip which would have required travelers to drive 80 miles prior to 1969 now requires them to travel 125 kilometers!

The U.S. government likes to pull similar stunts from time to time. GOP presidential hopeful Ron Paul informs us that "what you could buy with $1.00 in 1913 would now cost you $22.55." Paul claims that this terrible reduction in the dollar's purchasing power means that Americans' "quality of life has suffered."

By now you see the point (if not, note that 80 miles is equivalent to about 125 km). The relative value of a dollar in 1913 has nothing to do with the purchasing power or welfare of Americans today, just as the choice of measuring standards has nothing to do with the actual physical distance between Auckland and Hamilton. People who believe otherwise suffer from a condition known as money illusion.

A dollar in 1913 and a dollar today are just two different units for measuring prices. The real price of something is determined not by its dollar value but by what the consumer must give up to get it (typically hours of labor). What matters for Kiwi commuters is not the number on the street sign but the time it takes them to make the journey (or the amount of petrol they'll need). Likewise the reasonable way to measure Americans' cost of living over time is to measure how many hours they must work (or the effort required) to buy the goods they need to buy; money is irrelevant. Back in reality, the cost of living for Americans has declined dramatically since 1913, even as the value of the dollar in terms of goods (or labor) has decreased. This means that things weren't actually cheaper in the old days, no matter what your grandparents say. Comparisons of dollar prices across time are meaningless and irrelevant.

If you or someone you know suffers from money illusion, watch this video by Steve Horwitz: