Facts about jobs that may surprise you

To see why this is interesting, consider the following figure (click for larger image).** 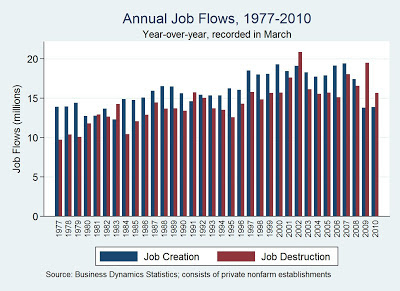 Note that the chart records job flows in a given year as of March of that year; the Job Creation (blue) bar for 2010 refers to employment gains at expanding establishments between March 2009 and March 2010.

The depths of the Great Recession are captured by the bars for 2009 and 2010. Observe that in these years, businesses hired around 14 million new employees! In a private workforce of 110 to 120 million total employees, 14 million hires is significant. Many businesses opened or expanded during the depths of the recession. This probably surprises some people.

The problem, of course, is illustrated by the Job Destruction (red) bars. Between March of 2008 and March of 2009, shrinking or closing businesses destroyed almost 20 million jobs. That's almost one-fifth of the US economy.

Job recessions can be easily seen in this chart. When the blue line is taller than the red line, the economy has added jobs on net. When the opposite is true, national employment has declined.***

What should we learn from this chart? I can think of a few things:

*More precisely, these job flows definitions are discussed here and are defined as:

**Data from Business Dynamics Statistics (BDS). These are aggregated from establishment-level administrative data and are subject to long release lags. 2010 is currently the most recent year available. Note that the BDS can be thought of roughly as the "population" for both the CES and JOLTS surveys, except that those surveys also include government.

***The difference between the blue and red bar for a given year should roughly equal the sum of the popular monthly private nonfarm payroll growth measure released by the BLS (summed over 12 months from March to February).
Posted by Ryan Decker at 7:09 AM