I really like this article on student debt and homeownership because it covers a few things that I think about often.


Fears among whom? I think I may buy a home in the next few years, so I'd love it if something "crimps" home purchases, perhaps making prices lower for me. This illustrates a broader point about housing, which is that coverage of housing markets is typically written in terms of the interests of people who like high house prices--home builders, incumbent home owners, and realtors. Recall that the housing crisis wasn't a crisis for everyone; I know people who bought houses at the bottom of the market. They didn't mind that home purchases were "crimped" at the time.*

But new data suggests that student debt may lead young adults to defer homeownership rather than skip out on it entirely. Moreover, the housing market may face a greater drag in the long run from weaker homeownership among adults that don’t attend college, especially if income prospects don’t improve for those who don’t go.


So the housing market faces "drag" if homeownership rates decline. This claim is probably true, but it's a bit misleading. People have to live somewhere--even non-homeowners. Homeownership rates only affect the amount of new housing sold to the extent that renters and owners live in different types of housing. If I don't buy housing, Blackstone will. Maybe it shifts composition toward smaller houses and apartments (though with other amenities), and probably it affects the fortunes of realtors, but as long as people are forming households we're going to need to build residential structures. And if there's a household formation issue, let's call it that instead of worrying about homeownership specifically.

Here's a chart from the article: 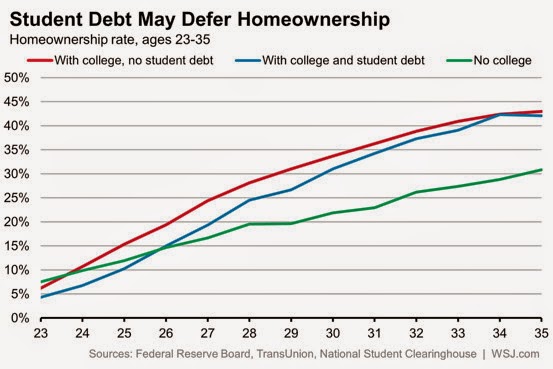 Homeownership and student debt are similar in that they both receive a ton of political attention (and subsidies), and they both are mostly about rich people. Speaking relatively, poor people don't own houses and don't go to college. I have heard many people say that financial crisis policies should help homeowners instead of rich bankers, but I never heard anyone say that financial crisis policies should help renters instead of rich homeowners.** Similarly, populists are on a crusade to help people struggling with student debt, that is, people who are likely to have high lifetime earnings.

That's not the only way that homeownership (which is often just homeborrowership) and student debt are similar. I'm not convinced that there is a student debt crisis, but it does strike me as odd that a popular response to the "problem" of too much student debt is to make student debt cheaper. Similarly, I've read that the financial crisis was caused by too much housing debt, and the best solution for that problem is to subsidize housing debt using the old Uncle Sam Put. As crisis response tools these may be fine--unless we're in a dynamic game.


*I'm being slightly too cavalier here, since (as I've written before) pecuniary externalities matter in this market; and of course there are the demand shock arguments.
**I realize that the good arguments for helping homeowners were about demand spillovers (Mian & Sufi stuff), which is fine. I also realize that the stimulus packages included lots of help for low-income people--generally, our countercyclical policies are heavily weighted toward the poor. I'm just focusing on the rhetoric from a specific debate here, i.e., the rhetoric suggesting that we should help poorer rather than richer people.
Posted by Ryan Decker at 10:29 PM